No exciting changes this week, so instead I’ll share a peek into the ongoing work on the next AI update. Continue reading if that sounds interesting to you!

In the most recent AI update, you could witness a shift of the AI playstyle from recklessly aggressive into more measured and defensive. The overall feedback on this was very positive and I’m proud that I finally got to the point where the AI can play defensively with some degree of competence… But.

I know some of you also miss the more chaotic and punishable AI from before and frankly, the current rivals can sometimes feel quite boring and passive. Especially when it comes to fighting back against a stronger foe.

To improve this and lay a good foundation for other planned features, I’m aiming to make the AI playstyle more customizable:

I think that the best way to get there might be to make the AI configurable in a similar fashion as the map generator. What do I mean by that? In the conquest UI, you have three types of conquest maps, but under the hood there is just one core algorithm which takes a bunch of input parameters and generates maps that look a certain way based on those inputs. The three kinds available to the player are just some particular presets for the generator which happen to produce cool results. (for a more hands on demonstration see this demo of the map generator)

Similarly, I don’t want to code separate AI modules for different situations or AI personalities. I’ve done a bit of that in the past, and it becomes such a pain to maintain and extend. Instead, I want just one algorithm which can be parametrized with a set of inputs to produce different playstyles.

The values of those inputs could then be predetermined by the AI personality, affected by difficulty level, affected by situation on the map, or even customized in level editor.

You can picture those inputs as sliders that you can move to adjust how the AI will play. Currently I call them “traits”. In this post I’d like to highlight two of the most impactful ones:

Traits adjustment based on situation 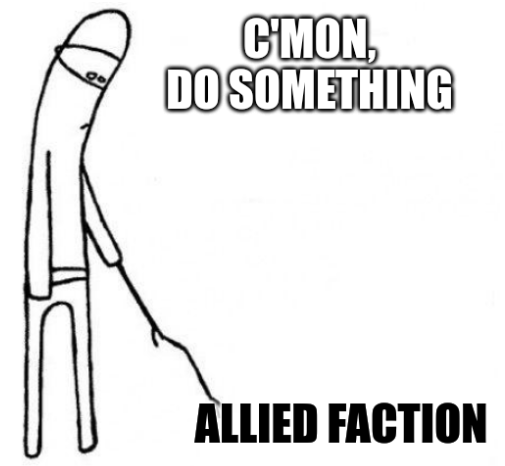 An interesting feature of these two traits in particular is that while in general each approach can be considered a viable playstyle, in some situations, there is an obviously “correct” choice. For example:

I think teaching the AI such common sense playstyle adjustments should help a lot to make it feel less boring and brain dead in some situations.

After a few design iterations, I came up with a way to express this with a delightfully simple model. When deciding how to play, the AI will first look at two indicators computed from the game state:

Basically power tells you how much you’re dominating the game right now, while forecast tells you how promising your current position is in the long run.

Based on these two indicators, the AI traits will be shifted roughly according to this table: 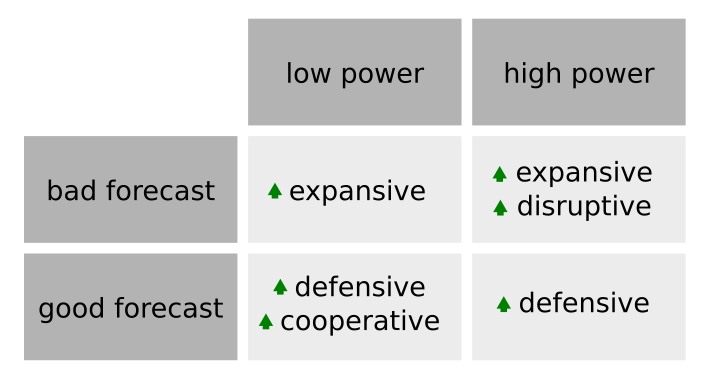 This simple relation between the indicators and the traits adjustment encapsulates a bunch of common sense advice:

So far most of this is only “on paper” so we’ll see if this actually works out as well as I’m imagining. But I have a good feeling about it!

It would be interesting to talk more about the other traits as well, but this post is already way too long. Maybe next week 😉. For now let me leave you with this thought: Where do you as a player fall on the disruptive/cooperative and expansive/defensive spectrum? Maybe next time when you’re struggling with some level try to switch up your playstyle, the results might surprise you!